Eduardo Chillida was a Spanish Basque sculptor notable for his monumental abstract works. Chillida worked across many mediums, including painting, drawing and sculpture. He is best known for his work in sculpture.
Chillida’s earliest sculptures concentrated on the human form (mostly torsos and busts); his later works tended to be much bigger in size and more abstract, and included many monumental public works. Chillida himself tended to reject the label of “abstract,” preferring instead to call himself a “realist sculptor.” Upon returning to the Basque Country in 1951, Chillida soon abandoned the plaster he used in his Paris works – a medium suited only for his study of archaic figurative works in the Louvre. Living near Hernani, he began to work in forged iron with the help of the local blacksmith and soon set up a forge in his studio. From 1954 until 1966, Chillida worked on a series entitled Anvil of Dreams, in which he used wood for the first time as a base from which the metal forms rise up in explosive rhythmic curves. He began to make sculptures in alabaster 1965. Rather than turn over a maquette of a sculpture to fabricators, as many modern artists do, Chillida worked closely with the men in the foundry. He then usually added an alloy that caused the metal to take on a brilliant rust color as it oxidizesd. 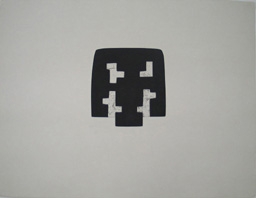